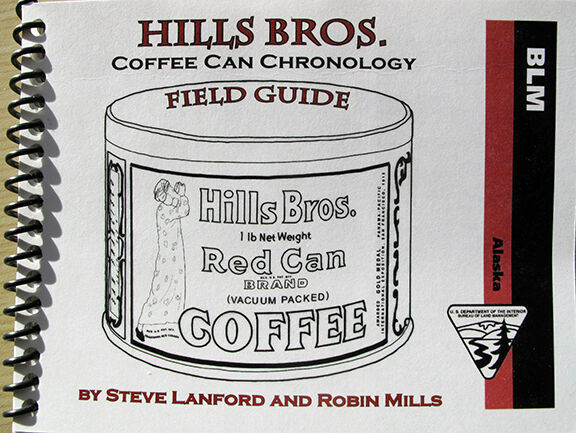 The coffee can field guide produced by Steve Lanford and Robin Mills. 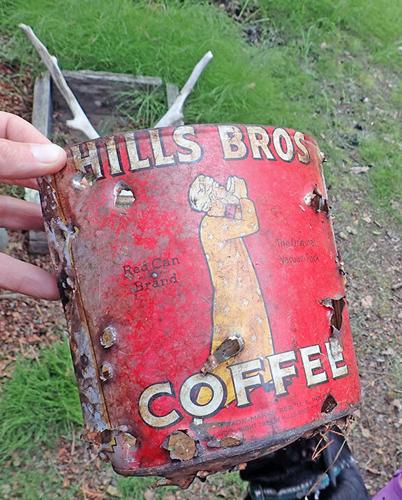 A Hills Bros. coffee can found at an old cabin on the Fortymile River. 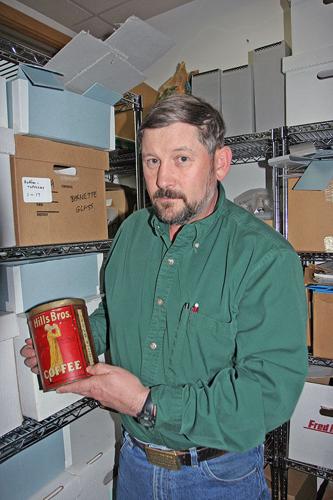 Steve Lanford holds a well-preserved Hills Brothers coffee can recovered from an historic site on public lands in Alaska. The company made numerous small changes to the label over the years, so archeologists utilizing a guide book can determine the age of cans they find.

The coffee can field guide produced by Steve Lanford and Robin Mills.

A Hills Bros. coffee can found at an old cabin on the Fortymile River.

Steve Lanford holds a well-preserved Hills Brothers coffee can recovered from an historic site on public lands in Alaska. The company made numerous small changes to the label over the years, so archeologists utilizing a guide book can determine the age of cans they find.

The year is 1905. You are a prospector in Alaska relaxing in your cabin after a chilly day of working the tailings pile. Craving a cup of joe, you pull a tin of coffee off the shelf. Though you can’t imagine it, that distinctive red can, the one you will later use for your precious supply of nails, will long outlive you. And it will give an archaeologist a good idea of when you made your Alaska home.

The coffee was Hills Bros. The can was vacuum-sealed. For more than a decade, no other coffee company mastered this technique that was first used with butter. This made Hills Bros. of San Francisco the primary choice of early Gold Rush cabin dwellers.

The pungent beverage was so popular in Alaska it inspired an archaeologist to produce a field guide, the “Hills Bros. Coffee Can Chronology.”

Steve Lanford of the Bureau of Land Management in Fairbanks finds Hills Bros. cans valuable because he finds the sturdy cans at old cabin sites all over interior Alaska. Lanford knows that designers at the company changed the label often enough that the cans are a diagnostic tool helpful when estimating when someone lived at a site.

“They didn’t leave their diary on the table,” Lanford said of the gold seekers who built cabins all over Alaska. “But these coffee cans show up often enough in their dumps to give us good information.”

Lanford has rooted through the trash heaps of old cabin sites and older prehistoric sites throughout the Interior for years. He teamed with BLM’s Robin Mills to produce the field guide to Hills Bros. cans. His goal was to create a tool for archaeologists.

“This lets us walk away from the site and not disturb it, and it allows us not to take up space in a museum with cans,” Lanford said.

“Even prehistorically, that’s what we are looking at — the leftover materials from where they made their tools or built their shelters.”

To make his palm-size field guide, which covers Hills Bros. cans from 1900 to 1963, Lanford used a history book of Hills Bros. Coffee and real cans from a few archaeological collections. He filled in gaps by acquiring some tins from eBay.

In producing the field guide, Lanford took advantage of Hills Bros. designers’ frequent changes. For example, the Arab on the label has a visible left foot during the years 1932 to 1963, but the “C” in Coffee hides his left foot from 1906 to 1932.

Different years feature varying curves of the “r” in Hills Bros. and different text in the instructions for making the coffee. These words appeared under the heading “Coffee Logic” that appeared from 1914 to 1926:

“The coffee is turned over to you in perfect condition. Here our responsibility ceases, and unless you will cooperate with us by seeing that the coffee is made properly, our efforts and your money will be wasted.”

When asked how many Hills Bros. cans he has seen over the years, Lanford said, “Oh, goodness . . . We have a site we worked on this summer with five cans that were different. People had lived at the place continuously for about 20 years.”

Archaeologists who study the Gold Rush period can often tell a cabin’s heyday from a quick glance at the dump site. Lanford, for example, can tell you the years Log Cabin syrup came in a can shaped like a log cabin. And what about old bottles, which endure even longer than cans? Don’t get him started.

“I can spend a number of hours talking about bottles,” Lanford said.

Will snow accumulate before October 1?