Skip to main content
You have permission to edit this article.
Edit
1 of 5 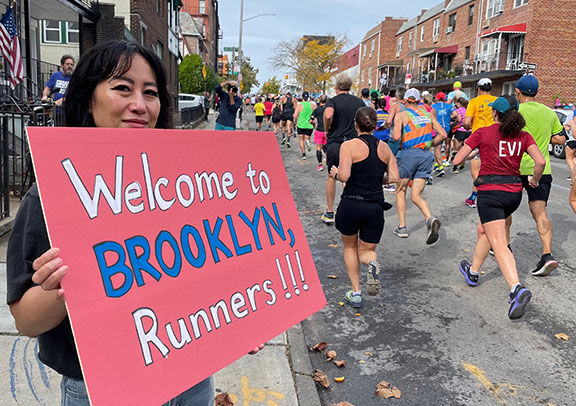 A woman welcomes runners to Brooklyn during the New York City Marathon on Nov. 6, 2022. 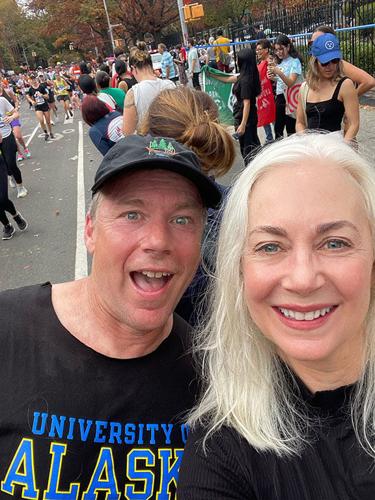 Ned Rozell pauses with his sister Mary in Brooklyn as he runs the New York City Marathon on Nov. 6, 2022. 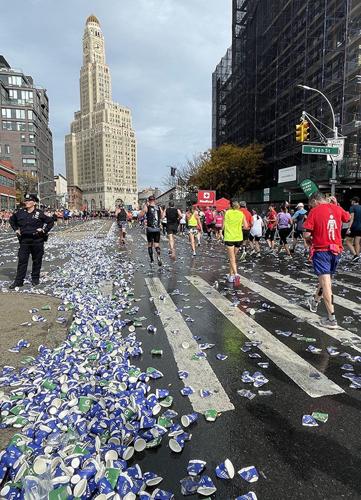 Cups that held sports drinks and water pile up on a Brooklyn Street during the New York City Marathon on Nov. 6, 2022. 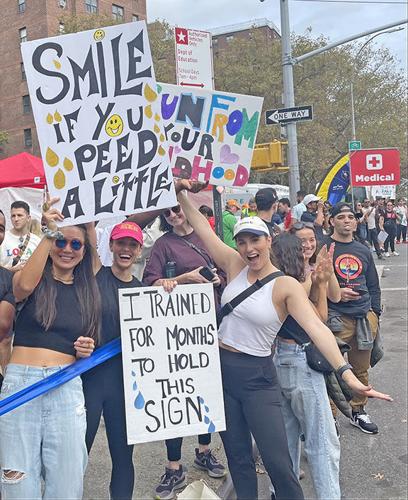 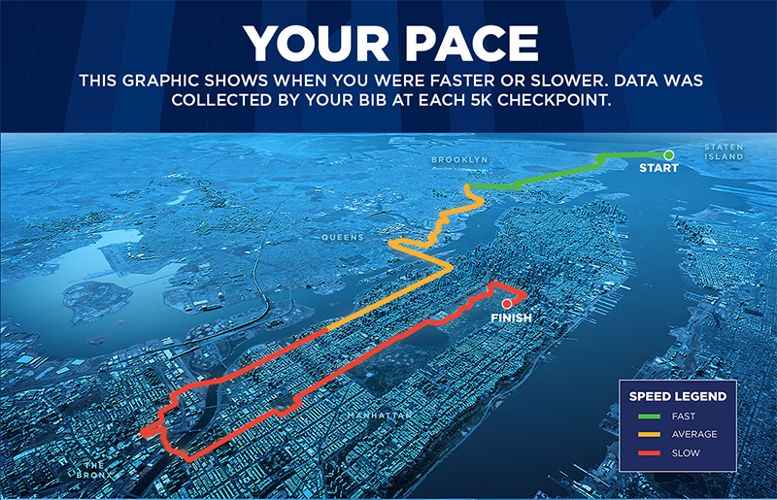 A map shows Ned Rozell’s journey through the five boroughs during the New York City Marathon on Nov. 6, 2022.

A woman welcomes runners to Brooklyn during the New York City Marathon on Nov. 6, 2022.

Ned Rozell pauses with his sister Mary in Brooklyn as he runs the New York City Marathon on Nov. 6, 2022.

Cups that held sports drinks and water pile up on a Brooklyn Street during the New York City Marathon on Nov. 6, 2022.

A map shows Ned Rozell’s journey through the five boroughs during the New York City Marathon on Nov. 6, 2022.

Last March, New York City Marathon officials notified me that they had selected me in the random lottery; I should not be alarmed when my credit card was dinged for $295.

That was the steepest marathon fee I have ever paid, especially compared to the lifetime Equinox Marathon bib I purchased in the 1990s for $125 (which is the best investment I’ll ever make).

But, ya know, as I sit here at my sister’s house in Brooklyn with sore legs and a fuzzy head, the New York City Marathon seems worth more than money. When I search for one word, I keep coming back to joyous.

It started at 5 a.m. on Nov. 6, 2022, when my sister Mary volunteered to drive me from Brooklyn to the dock of the Staten Island Ferry in Manhattan. As we left her brownstone in the black of morning, I looked up and saw the Alaska flag in the sky: The Big Dipper pointing to the North Star. Good omen.

I packed onto the boat with hundreds of other people clad in running shoes and frumpy clothes they later would throw in donation boxes on Staten Island (worn to keep warm while waiting hours for their race to start). With no seats left, I stood and looked out the ferry window at the dark sea of New York Bay.

There, lit up and glowing green on her own island, was the Statue of Liberty. I choked up a bit, thinking of my grandmother Mary Liston, who was a friend of mine (we toured Ireland together when I was 22 and she 85). “Nanny” had sailed past Lady Liberty to Ellis Island in her 20s as an immigrant from Ireland. My grandfather Ned, who died a few years before I was named for him, shared that experience.

Maybe Nanny’s story and the recency of that side of my family becoming Americans has made me feel a pull to the big city, which is strange considering my life choices. Maybe that attraction is also due to newborn me belting out my first scream in Manhattan, where I was born before my parents moved to upstate New York.

From there I hightailed it 36 years ago to Alaska, where I have lived ever since. In that time, Nanny and both my parents have died, and my two brothers and two sisters have given me nieces and nephews. Most of those kids have grown up and fledged. It happened so fast.

Enabled by reasonable air travel prices for as long as I have lived in Alaska, I have tried to make it back once or twice a year. On one of those trips, in 2009, my wife Kristen ran the New York City Marathon.

Back then, squinting at the subway maps, our daughter Anna and I popped up in Brooklyn but never caught a glimpse of Kristen until after she finished in Manhattan and was wrapped in a shawl of foil.

In Brooklyn, Anna and I saw crowds yelling as if the Beatles were back in town. Since then, I have tried to enter the race by random lottery, which offers you a 2 percent chance of getting a bib. In 2022, my number got called.

Which is why on a warm November morning I was standing on the upper deck of Verrazano Narrows Bridge with thousands of other people. That suspension bridge at the pinch point between upper and lower New York bays carries 13 lanes of car and truck traffic on two levels between Staten Island and Brooklyn when the race is not happening.

I imagined I could feel the deck bouncing as we left behind Staten Island, the smallest New York borough by population (about a half million). All those people live in the same space as Alaska’s Douglas Island near Juneau (home to about 5,000 people).

Five thousand is perhaps how many people were moving on the top tier of the Verrazano Narrows Bridge when my feet were on its asphalt Sunday. Not many of us looked alike. People chatted in some languages I could place, some not.

I turned and talked with Anna from Aruba, originally from Venezuela. Anna had braces on her teeth. Her teenage son spoke four languages.

“I am happy it is warm,” she said. “My training runs in Aruba are all at 27 degrees (Celsius, or 80 degrees Fahrenheit), so this feels good.”

“This is like the hottest day of Alaska’s summer,” I told Anna.

A temperature of 75F was recorded in Central Park on race day, a record for Nov. 6.

Heat is not a friend to most runners. When we overheat, mammals like us get tackled by lions — our cells don’t function well, our muscles cramp and we slow way down. I could feel my face getting red on the bridge, not yet into the second borough of the race and less than two miles into the day.

Approaching Brooklyn, we could hear it before we saw them: A soft, constant roar, like waves crashing the shore on the Lost Coast south of Yakutat.

We jogged off the bridge ramp and into Brooklyn. The din was people, lining the streets four deep behind a strip of blue plastic tape that resembled a thick finish line. They were cheering. Not for the two Kenyans who had passed a few hours earlier on their ways to winning the men’s and women’s races. But us, a multicolored mass oozing in slow motion compared to the elites.

Friends who had run the race told me to wear my name on my shirt, so people in the crowd can call it out. I instead chose a University of Alaska Fairbanks t-shirt where the ALASKA stood out in blue and gold.

And there, as I decelerated for the next few hours, I heard that word, which hit like a shot of electricity each time.

I ran on the far right of Fourth Avenue in Brooklyn (the shady side), slapping my sweaty hand into the palms of kids and adults of all sizes and races. Each thwack gave me a few free steps, floating on air. One guy almost popped my rotator cuff.

At one point, I turned to a woman next to me whose face was cherry red like mine. She was smiling at the din of cheers, and signs held up, each with a New York flair: I LOVE YOU, RANDOM STRANGER.

“I may pass out from heat stroke, but I’ll die happy,” I said to my new friend.

My aunt Fran — Nanny’s daughter — once pointed out to me that for all the billions of people in the world, no two faces are exactly alike. I saw hundreds of faces that day, making eye contact with kids whose hands I smacked and people who shouted Alaska. But my brain’s facial recognition software pinged with a positive match only once.

There was my sister Mary, standing on the steps of an ornate Baptist church one block from her house in Brooklyn. I stopped and picked her up for a hug. Joy.

On I went, bopping past rock bands playing at gas stations, recorded music blaring at eardrum-damaging volume on every corner, and pods of uniformed police who stood in the middle of cross streets.

I could tell from the increasing weight of my cotton Alaska shirt that the relative humidity was high. Every few kilometers, volunteers held out cups of sports drink and water. The streets around those stations were coated with crushed paper cups, trod to a watery pulp.

The course featured 400 port-a-potties for each mile, none of which was there the day before, nor the day after.

I sucked down both sports drink and water at every stop, happy for the chance to walk, which helped cool the engine.

Nearing the end of the 11 miles of Brooklyn, we runners moved through Williamsburg, one of the few silent places on the course besides the five bridges. Williamsburg is home to a large population of Hasidic Jews who seemed disinterested in the show. No one stood behind the blue tape.

Losing the cheers and the hand slaps there flipped me back to Alaska running, where most of the trail is covered alone and it helps to groove on the meditative repetition of one foot after another.

That Zen was harder to find in New York, but soon it was back to the cheering crowds and high rises of Queens, then over a bridge to Manhattan, then over another and a one-mile tour of the Bronx before re-entering Manhattan from the north. Each borough felt a little different — Brooklyn was homey, the Bronx industrial, and Manhattan had everything.

The race had its own smells: the musk of the subways beneath wafting from metal grates, clouds of skunky marijuana smoke, Vaseline, and salty sweat, buckets of it.

The last bridge crossing from the Bronx to Manhattan was 21 miles into the race. A good number of people were walking. The scene resembled a parade. The heat index was collecting its toll.

It was around there the male leader of the race, Daniel Do Nascimento of Brazil, had hours before collapsed and left the course after having sped to a two-minute lead for half the race. I jogged past people stopped on the pavement with grimaces on their faces, stretching their cramped legs. A woman I met a day later said she had vomited 12 times. Her finish time was an hour faster than mine.

The Manhattan crowds lined the route all the way to its finish in Central Park. The yelling was somehow louder than ever; my ears rang (and are still ringing).

Many people trotted past me in the last few miles. In Fairbanks’ Equinox, I would feel a burst of adrenaline when that happened. In New York I didn’t care. It was all about that lighthearted post-pandemic-humans-pressing-against-each-other atmosphere, which had enough emotional punch to mist my eyes in the last two miles.

There, I thought of 2020, when my brothers and sisters let me enter their homes when they didn’t know if my breath would kill them. And how this year, 2022, was the first year international runners were allowed back to compete in the New York Marathon since 2019, swelling the ranks from 30,000 to more than 50,000.

All those humans restored what I have always believed, but has wavered at times: Most people are good, and there is something in every human that every other human can relate to.

That day, thousands of our species were out there, standing and smiling and breathing each other in for a few hours.

As the crowd roared like I was Aston Kutcher or one of the other celebrities, I smacked a last few hands before a slight uphill when the finish line appeared. I crossed the mat near Tavern on the Green at the same time as three others. We tied for 26,033th place. Joyous.

Do you look forward to the open houses each year?