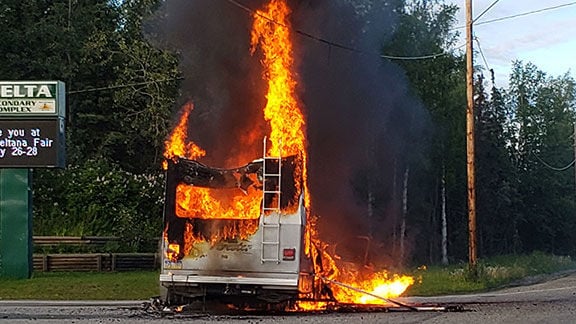 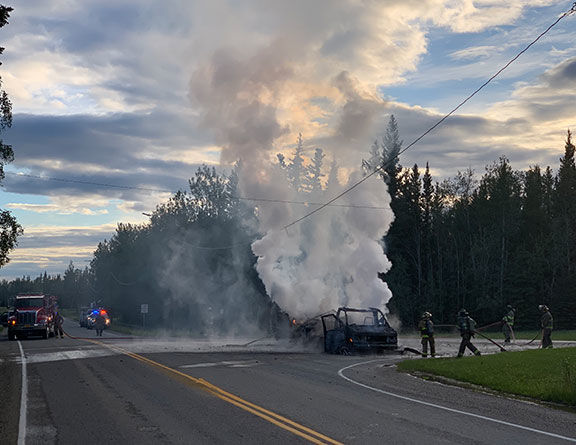 A fire destroyed an RV on Nistler Road at the entrance to the Delta High School Monday night. The fire, which appeared to be caused by some type of electrical issue, occurred while the owner of the vehicle was driving home with their family from a fishing trip. All of the occupants were able to safely exit the vehicle as the fire began. An attempted by the owner to suppress the fire with a fire extinguisher was unsuccessful.

Chief Tim Castleberry with the Rural Deltana Volunteer Fire Department said responders received the call about 9:15 Monday night. The first responders were on scene within minutes and the vehicle was fully engulfed with fire and had caught a power line on fire when they arrived, he said.

Three firefighters and one tender from the City of Delta Junction Fire Department and 11 responders and two engines from Rural Deltana responded to the fire.

Castleberry said responders shut down Nistler Road to protect people from passing by with the power line that was on fire and the venting of propane from the vehicle’s propane tanks. He also said shutting down the road is common to protect firefighters working at the scene from traffic.

The location of the power line only a few feet above the vehicle hindered firefighting efforts until it was determined that the line was for the City’s streetlights and the power could be shut off. GVEA responded to assist with the power line issue.

Michael Paschall is the editor and publisher of Delta Wind and can be reached at editor@deltawindonline.com.