Skip to main content
You have permission to edit this article.
Edit
1 of 2 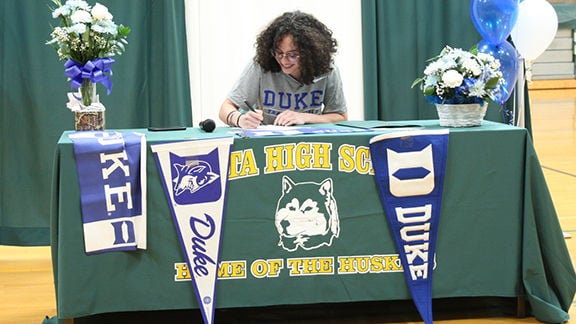 Hailey Williams signing the letter of intent to attend Duke University, a Division One school located in Durham, North Carolina in the fall of 2020. 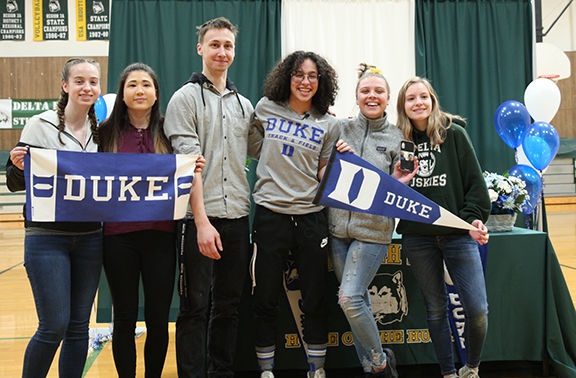 Hailey Williams signing the letter of intent to attend Duke University, a Division One school located in Durham, North Carolina in the fall of 2020.

Delta High School senior Hailey Williams signed her letter of intent on Tuesday to attend Duke University in Durham, NC in the fall. Williams has been gaining the attention of several university sports programs around the country.

While Williams was known as being fierce on the basketball court, she turned her focus towards track.

Williams poured all of her energy into her training spending time in Delta Junction or in Anchorage with performance coach DeWayne Ingram. Three times monthly, Williams travels to Anchorage for additional training and trying to refine and sharpen her skills.

Back in June of this year, Williams was name the Gatorade Player of the Year for Alaska. This is the 34th year that Gatorade has been honoring the nation’s best high school athletes.

This award from Gatorade not only considers athletic ability but places high value on exceptional academic achievements and quality of character. Williams has be carrying an A average and is actively involved in other student activities, including being the student representative on the School Board.

Williams became the first Alaskan girl in 37 years to break the12 second barrier for the 100-meter dash when she clocked in at 11.95 at the New Balance Nationals in Greensboro, North Carolina in June. Williams also holds the record for fastest 100-meter time at the state championships, clocking in at 12.38 in May.

The key to Williams success is that she is a believer in setting goals. When she achieves the goal, she sets a new one even higher to challenge herself to reach even further. Williams said that even though we live in a remote part of Alaska, it only means that we have to work a little harder to achieve our goals.

Williams described her feelings about her town and school, “We are family. We are all family.”

As for the future, Williams is very interested in sports psychology.

She said, “I am the kind of a person that likes to help people out.”

Williams acknowledged that Duke University has a highly respected medical school and she also expressed interest in surgical room nursing.

How cold did it get at your home this week?

How cold did it get at your home this week? Click and answer our survey.